Tenders and Turntables and Other Stories is a US VHS featuring episodes six Season 1 episodes and one Season 2 episode of Thomas the Tank Engine and Friends narrated by Ringo Starr. It was distributed by Strand VCI entertainment, & Presented by the Red Screen edition: Britt Alcroft in 1991 with an ERTL Toby the tram engine.

PEEP!-PEEP! Thomas the Tank Engine and Friends are setting off for all new adventures on The Island of Sodor. You'll see Henry getting involved in something fishy, and Percy trying to back out of an embarrassing situation. Find out how Henry avoids being replaced, and why Thomas ends up in the stationmaster's dining room. So climb aboard as we clear the way for some heartwarming fun! 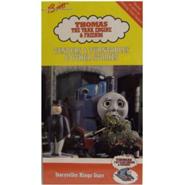 Back Cover
Add a photo to this gallery
Retrieved from "https://ringostarr.fandom.com/wiki/Tenders_and_Turntables_and_Other_Stories?oldid=4222"
Community content is available under CC-BY-SA unless otherwise noted.